Yesterday’s feature on the horrors of Nickelback involved a short discussion of the relationship between we Canadians and our international celebrities. Some we take great, almost irrational pride in (Neil Young), some we consider traitors (Brett Hull and his counterfeit 1996 World Cup gold), some we want to be more popular elsewhere (Terry Fox who can’t be famous enough) and some we pretend are from upstate New York or something (Howie Mandel). Why this matters so much to us is the subject of a lengthy dissertation that I have a feeling you’re not in the mood for anyways.

Those categories work almost perfectly, but in writing the article I realized that there is really only one Canadian who just doesn’t fit in this schema at all. He’s internationally famous, a total embarrassment and national shame, but still an object of a sick sort of pride somehow. Me, I love the guy. He is, of course, the one and only: Robert Ford. I couldn’t fit him in to yesterday’s post without hijacking it completely, so I figured I’d give you a special Rob Ford bonus edition, with some great stuff that you’ve surely seen before, but this is so classic that it will never, ever stop being funny.

And lastly, this one is amazing! And was one I hadn’t seen before. Apparently Deadmau5 (hey, did you know he’s Canadian?) did this thing where he went for coffee with people, sort of like Jerry Seinfeld does, in his crazily-painted Ferrari. Like his music or not, this car is freaking awesome, and is exactly what you should be doing if you have too much money. 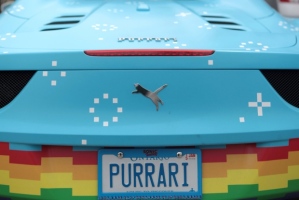 Now apparently Deadmau5 did a coffee run with Rob Ford! I didn’t know about this, but man is it great. It isn’t a spectacular encounter, exactly, but Deadmau5 is obviously trying not to laugh the whole time. What makes it great is when they pull into the Tim Horton’s drive through and Robbie orders “five expressos in one cup” ?!?! At which point his host does start laughing. The baffled worker doesn’t understand until Deadmau5 changes the order to two doubles and a single, in one cup. It’s just glorious. I’ve cued it up for you below.

Ridiculous postscript: Ferrari actually sent Deadmau5 a cease and desist order! Apparently his car looked too awesome. I really cannot understand the legality of a company demanding that you present their product in a certain way after you’ve purchased it, but hey… apparently he sold the car, after restoring to its original state. Boo.