Yesterday we had a lighthearted look at weird flags. Today we’re diving into the deep end with a very different subject: identity, memory, the nature of evil, and the holocaust. Forgive me the turning down of the fun dial.

The question that spawned this entry was about Jennifer Teege, who yes indeed, is the black granddaughter of white Nazi concentration camp commandant Amon Goeth. Surely we all momentarily wondered how this might have come to be; well I will tell you. The tale begins, of course, with Amon Goeth.

He was a German and SS member from the early 1930s, who was involved in black operations in Austria before the Anschluss (German for “union”) which merged the two countries. Hitler demanded that Austria accede to numerous demands, including appointing various Austrian Nazis to positions of power within the government. The doomed and pitiable Chancellor Kurt Schuschnigg, whose predecessor had been blatantly assassinated by Nazis, attempted to escape German domination by holding a national referendum on union with Germany, but Hitler retaliated by simply invading. Schuschnigg resigned, wanting to spare his country bloodshed and suffering and spent the rest of the time up to the end of the war in concentration camps.

After the Anschluss and with the commencement of hostilities proper in Europe Goeth eventually found himself in Poland, where he was appointed commandant of the Plaszow concentration camp.

It is obvious that the head of a Nazi concentration camp was not a good guy, but our story depends on some of the horrific detail here (later dramatized by Ralph Fiennes in Schindler’s List). Many of the most infamous German war criminals of the era were guilty of orchestrating the holocaust. Goebbels, Himmler, Goerring, Heydrich, Eichmann, even Hitler himself were, ultimately, sadistic and evil bureaucrats and governors. Don’t for a second think that this at all minimizes their crimes; what I mean to point out here is that many of the more famous Nazis committed their crimes at a systemic level, as the architects and enablers of what would unfold in Europe under Nazi rule. Goeth was different. He was the rare bird who was both in a position of some power, and thereby with administrative responsibility for what happened under his watch, but also a sociopathic monster who directly participated in brutal, random murders for no discernible reason beyond the simple fact that he could.

Most infamously Goeth would arbitrarily shoot prisoners from his porch, and also trained his pet dogs to rip prisoners apart on command. And yes, even by the insane standards of the era, this conduct was exceptional. The man was simply a beast, who could in no way explain even a fraction of his behaviour as being the product of his circumstances. Again, this doesn’t comparatively absolve other Germans of the time, but I think it does make finding out that you are his direct descendent even more disturbing, in the same way that finding out your father is a serial killer would be unsettling. In a perfectly German ending he was ultimately relieved of his command for the crime of stealing Jewish property, which belonged to the state, of course.

While at Plaszow he took up with a woman named Ruth Irene Kalder.

Amon and Ruth had an illegitimate daughter together named Monika. 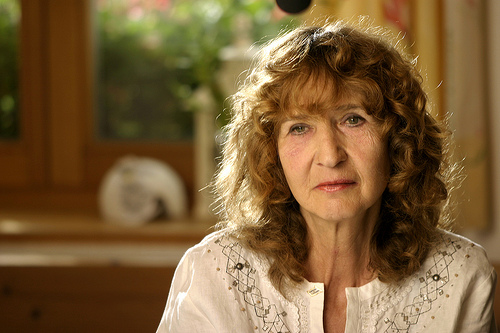 After the war Amon was captured by the Americans, extradited to Poland and hanged for not only numerous crimes against humanity, but also actual homicides. You can watch his execution online, which is a wonder of the internet, and a source of wonder as to why someone like me would watch it. I did. You shouldn’t. What was I expecting, exactly? A pathetic human life snuffed out after a few hamfisted attempts gone wrong where the rope fails to go taut and they have to string him up again. He reacts impassively to the whole bungling affair, and the spectacle offers exactly no insight into the human condition whatsoever. Except for the fact that I chose to watch it while sitting in a lawn chair on my front porch, seventy years later, and immediately regretted it. You think and hope that maybe you’ll watch it and catch some affirming expression of regret flash across his face, some sense of the waste of, if nothing else, his own time on this earth. Maybe you expect to see defiance or a final act of aggression against the world, to confirm to you that yes he really was the monster he appears to have been, but you actually don’t see anything at all. Just a man on the end of a rope, and some guards going through the motions of doing a job.

Ruth then goes on with life in Germany, raising Monika under what sound like deplorable conditions (she eventually takes work as a prostitute). Eventually Monika has a brief affair with a Nigerian man and has a daughter. Jennifer.

And here’s where this become’s Jennifer’s story. At the age of three she is put into foster care, and is eventually adopted, and never sees her biological family again for a very long time. Ruth, Amon’s mistress and Jennifer’s grandmother, dies in the early 80s, maybe because of the guilt of what she was a part of. She helped raise the dogs, you see. I found a tale of her arranging to meet a survivor of the camp in Poland. It isn’t unlike other such tales, but it makes you remember that these are real, frail people. Upon the publication of the novel Schindler’s List in 1983 Ruth gave an interview to the BBC, with her daughter Monika listening in the next room. It was the first time she learned the truth and extent about her own father. Ruth killed herself the next day.

Now at this point Jennifer has no idea who her biological family really is. She travels to Israel and studies there. Then at the age of 39, her mother whom she hasn’t seen for most of her life, publishes her memoirs: I Must Love My Father, Right? Jennifer leafs through the book and realizes “this is my family”. Whatever you think of identity politics and whatnot, that has to be a real doozy. Your grandfather is one of the worst people, well, ever. And you’ve had no idea at all until now.

After some time Teege published her own book called My Grandfather Would Have Shot Me. I suppose that pretty succinctly sums up her family conundrum. I’ll be honest and say that I assumed her story wouldn’t be that interesting, but then I stumbled upon this interview she gave and I have to say that I was spellbound. It’s a long, thoughtful, insightful piece, that doesn’t fall into any cliches, nor traps of sensationalism. You can read more and watch the video here.

Jennifer Teege is a fascinating, inspiring character, who hasn’t really done anything exceptional beyond simply exist, and she knows it. Her experience is fairly unique in that, and she talks about it extremely eloquently, without trying to make herself someone to be pitied or admired, but it’s also obvious that there is real and profound pain in her life from which she knows she can’t escape. She talks about her own struggles with depression, and it’s like listening to the echoes of all the misery and madness caused by her grandfather reverberate dimly two generations later. I immediately thought “I would vote for this person” for whatever office. Check it out.